Graphic novels.  They are, to quote Star Trek, a new frontier.  I know what they are, a few I’ve actually read, but a ton I want to just go totally hermit with and read and shut the world out.  Sadly, I do have to work and pay the bills.  As I’ve lately been prone to do, I was perusing my library’s graphic novel section when I came across a title I have seen a few times before and decided I needed something I would enjoy and could devour in one weekend.  So Cursed Pirate Girl it was! 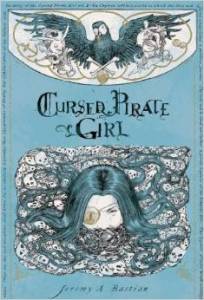 Cursed Pirate Girl by Jeremy Bastian attracted me because I like pirates.  I don’t know why but I do.  So pirates + graphic novel x young adult =super interesting.  And it was.  Sorta.  The premise is this girl, who has no name, is hanging around Port Elizabeth, Jamaica in the 1700’s searching for her pirate father whom she’s never met.  Apparently she’s a badass/hipster among the rag-tag kids in the city.  She happens to meet the governor’s daughter, Apollonia, who subsequently gets a girl crush on Pirate Girl.  This seems important but we don’t see Apollonia until the very end.  Also, Apollonia seems demonic.  She has no white’s to her eyes.  Just black eyes.  Like a demon child.  We’ll see in volume II if that’s something or I’m just reading way too much into it.

Governor gets worried about the riff raff his daughter is hanging out and decides to do away with Pirate Girl.  This leads Pirate Girl to being knocked out and set on the path to finding her father.  Also, we later find out the Governor makes Hannibal Lector seem normal.  And we also learn that Pirate Girl’s father lives in another dimension.  And once we end up there it’s sort of like Alice in Wonderland meets Finding Nemo.  I did enjoy this new world.  But the plot stalls here.  And then the book ends.  And now I have to wait for volume II to arrive.  Sheesh.

Ok, so worth your while? Meh.  The illustrations are super good.  I spend more time just looking in the intricate artwork and the world that is given to the readers than I did reading the succinct script.  But I wasn’t able to connect with any of the characters and the whole pirate father-living-in-other-dimension trope seemed far-fetched.  I think it will help once the entire story is written and you can enjoy the whole thing in one sitting.  But if you do need something enjoyable to read in a few hours, then I do recommend this graphic novel.

Check out this review on Cannonball Read 7.

I’ve had a troubled relationship with George R.R. Martin’s Saga of Fire and Ice.  It’s been two years since I read the entire extant series over the summer.  I hated the way he treated the characters, (read, Red Wedding) but wanted to continue the plot lines of some of my favorite characters.  So what to do with the encyclopedia that was just released this year?  Well I was curious.  And it didn’t kill the cat. 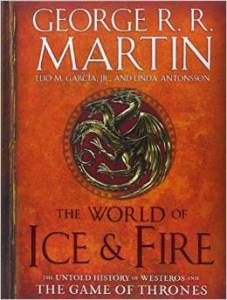 The World of Fire & Ice by GRR Martin, Elio Garcia, JR & Linda Antonsson is a creative take on some of the historical events mentioned in the Saga of Fire and Ice.  The creativity is what makes the book interesting.  It’s supposedly written by a Maester from the Citadel, so it’s fashioned as a treatise on the history of Westeros and some of the city-states and nations that make up the wider world of Martin’s imagination.  The history is divided into four sections.  The first is a brief history of the peoples who successively peopled Westeros.  Then it’s a history of the Targaryen kings who ruled the Seven Kingdoms for centuries.  Then it’s a historical account of each of the realms of Westeros.  The book concludes with an account of some of the places that exist outside of Westeros.

The first quarter of the book bored me to tears. The retinue of the kings and their madness gets old and it’s hard to keep the kings and their hereditary squabbles.  But I did find the history of each of the former kingdoms interesting.  Especially since many of the names and places mentioned in this book play a role in the books of the Fire & Ice saga.  So that helped clear up some of the chaos that I encountered during my reading.

If you’re a fan of Westros and it’s ilk, then I do recommend this book.  It’s more commentary than encyclopedia.  And it could use more maps to help keep all of the places and people in order.  I also think that the writers used a lot of artistic license when it comes to some of the historical events and places.  Especially considering that some of them are not mentioned in the series, so far.  So maybe those not already mentioned will play a role in future works?  Who knows.  I just wish that he would hurry up and finish this saga of his.  Other wise my impatience may just turn me into a Targaryen dragonlord.

It’s a shame I’ve waited so long to read this powerful novel.  Fahrenheit 451, by Ray Bradbury, is one of those books that you see listed on the must read lists.  And for some reason I ignored it.  I finally decided that I needed to read it as several of my students had read it and recommended it to me.  Plus, I’ve been thinking about teaching it during my Post-WWII unit. Excuses aside, I’m glad I finally cracked the cover. 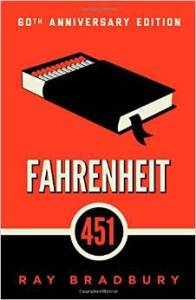 The hard thing about Fahrenheit is that it starts in media res.  And there’s no resolution.  It’s quite the Postmodern experience.  Especially for someone who teaches students about the parts of a short story, it’s nice to see someone who is playing with genre because it’s something new and I have to work a little to get acclimated to the style.  But it’s also something that I didn’t like.  The plot starts and just picks up pace right to the end.  It feels like running a race.  Except you never reach the finish line.  You just stop.  And there’s only a vague vision of the finish.  But the race that we did run was pretty awesome.

It just happened that I was reading Fahrenheit while I was teaching Thoreau’s Walden (just the chapters, “Economy,” “Where I lived, What I lived for,” and “Reading.”  And Fahrenheit mentions Thoreau and his expostulations on reading.  Particularly, the point that it’s important to read for the sake of the questions that authors ask and that make we readers question our thoughts and beliefs on things.  And for that reason I’m certain I want to teach this work to my students.  To show them that there’s an echo in literature in which no author is an island.  But also because, as a teacher, it’s better to let the book do the teaching.