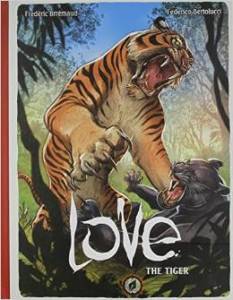 Basically tiger wakes up.  Tiger spots Tapir.  Tiger spends the entire time trying to attack Tapir.  That’s the overarching premise.  But along the way, the tiger meets other creatures.  A crocodile that can leap out of rivers and climb fallen trees.  And apparently tigers can get crocodiles to go away by clawing them.  The attack by the crocodile makes tiger angry, so when it comes across two panthers hunting a mouse it decides to attack both of them.  At this point it was clear to me that this tiger was bad news.

Tiger moves on from the hunt because he once again spots the tapir. Problem is that the tapir is at a lake where a female elephant is hanging out.  As the tiger waits to attack the tapir, a bull elephant, keen on mating with the female, gets run over.  Tiger doesn’t like this so he attacks the elephant, which goes badly for the tiger.  So as the elephants mate, the tapir escapes again, the tiger slinks off pissed and injured.  He comes across a man at his fire near his hut.  It doesn’t go well for the man.

I still don’t know what the point of this book is.  Either the author’s are trying to say that tigers are senseless killers, or that he was pissed that everyone else is getting some and he wanted wanted to get laid too.  There are better graphic novels out there.  I wouldn’t give this one any time.

To read this and other reviews by other readers, visit cannonballread.com