Last year I stumbled across a humorous tome, The Little World Of Liz Climo and was 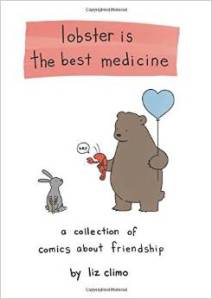 amazed at how so much humor could be packed into a such short comics.  I’m delighted to share with you Ms. Climo’s latest work, Lobster is the Best Medicine.  I was honored to be contacted by Ms. Was to receive a review copy in exchange for an honest review.  I’ve never received an ARC, although I sign up for those giveaways on Goodreads ALL THE TIME.  The odds are not in my favor.

Not that I doubted Ms. Climo, but I was worried what I would say if this latest didn’t live up to my enjoyment of the former.  This wasn’t even the case.  The snark, wit, and overall conundrums of friendships are tackled adroitly in Lobster and, dare I say, raise the bar on The Little World.

Friendships are something we are all have, yet are so unique and unexplainable.  Each friendship has its quirks and complex rituals, yet we do a lot of it unconsciously.  There’s also that love/hate relationship that underlies many friendships.  There’s that thing your friend does that you can’t help but tease them about.  For example, in Lobster, there’s a shark in a pool that is creeping up on a boat, the narration goes, “And the giant megalodon stalks his unsuspecting prey.”  The next scene shows the same shark holding the boat behind his back, while speaking to his friend, who’s apparently just shown up.  The friend wonders if the first shark was talking to the boat and first shark is trying to play it off.  We’ve all been there buddy.

There’s also the times we accept the eccentricities of our friends.  Like the penguin who is wondering why his orca friend is lounging on the ice.  The orca responds that he had just had lunch and is waiting an hour before going back into the water (ba dum tiss). Or the otter who is asking his shark friend what his wifi password is.  The shark answers that it’s “I eat otters”.  He defends himself by saying that it was created before he was friends with the otter.

I could go on and on, but I don’t want to spoil all the comical instances that explore friendships that Ms. Climo has delivered to us.  I recommend that you read the introduction in which she shares a touching instance of when a friend helped her out and how friends have played a part in her life.  Here’s hoping there’s another Liz Climo work next year!

One thought on “Lobster is the Best Medicine”